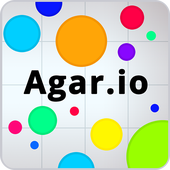 Agar.io is an interesting arcade game in which you control a tiny cell. Your main goal is to eat other cells that are controlled by other players, and to grow larger. The game has all kinds of special weapons and modes that make it unpredictable and addictive.

The main concept is simple: you spawn in a huge petri dish as a tiny cell. You can choose your nickname and avatar – they will be displayed on your cell. The gameplay is all about roaming around your little world, eating other cells, and growing larger. Of course, you’re far from being the biggest cell at the beginning, so you have to be especially careful when there are larger cells around.

Players with bigger cells will do anything they can to make you their lunch, so move faster, grow larger, and come back later for revenge. Of course, the gameplay is not that simple – Agar.io has a lot of additional options and features. For instance, there are different tactics in this game like splitting into a couple of smaller cells to avoid getting swallowed whole.

Moreover, you can dodge other cells or even shrink temporarily, making your cell easier to swallow but harder to chase. All in all, Agar.io offers very addictive gameplay that doesn’t get boring despite its repetitiveness or simplistic concept.

Agar.io is very demanding when it comes to controls quality – after all, every second matters when you chase your prey or trying to escape from another player. And the game has great controls. They allow you to control your cell easily, and they are especially comfortable to use on mobile devices, because this version of Agar.io was developed especially for touchscreens.

The gameplay of Agar.io is so simple that you can play it almost indefinitely: spawn, eat, get eaten, repeat. It is really great to have this possibility to try new tactics all the time, improving your skills while playing against other players online. However, this concept turns out to become less entertaining after about a hundred hours in the game, and then it really starts to be boring.

There is almost no such thing as graphics in Agar.io, because the game is literally about colorful cells roaming around an empty world with no borders. While it may be perceived as a nice thing, because almost every piece of color in the game is created by players, the game looks cheap and bland – even for an arcade.

The sound effects are average. The soundtrack is gentle, but the game wouldn’t be much worse, if the sounds of cells fighting were left alone.

Agar.io is a nice arcade game that can really help you waste a few hours on colorful cells fighting each other. The game is definitely recommended for every fan of similar free-for-all arcade games.