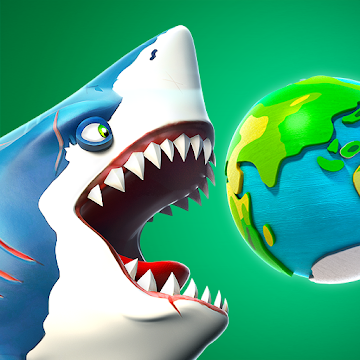 Hungry Shark World is an arcade game with a creative plot where you become a shark ready to eat everything. The game is available on the Android mobile platform. It is compatible with the Android 5.0 system and later. It was released by Ubisoft Entertainment.

Welcome to the world of sharks. You are one of them now. And you have to make chaos everywhere you go. After some time in the game, you will reach the level where you can catch the whale. There are 8 different categories of sharks, including the big white shark, which is the scariest killing machine in the game.

The Hungry Shark World game allows you to travel a lot and explore various oceans, including the Pacific and Arctic oceans. You may go to the Arabian Sea. Different places have their own specifics and inhabitants. Massive open worlds make the game incredibly entertaining.

Hungry Shark World controls are simple to learn. The game is extremely user-friendly, and you don’t have to learn mechanics, specifically if you are an experienced Android smartphone user. Your life and speed numbers will be in the right upper corner of the screen, together with the points you receive previously.

There are too many activities to perform in the Hungry Shark World game. You will not get bored no matter what your current mood is. If you don’t want to struggle against the hostile world, you can explore other open worlds. If you want to take part in a tough survival game, you can pick the extinction mode and challenge yourself.

Hungry Shark World has a colorful, stylish design. Visuals are uniquely fresh and luring. You will definitely enjoy wandering around, exploring new environments. There are vivid creative skins you can try on your shark. The game also offers to collect all the sharks in the game. They are all worthy of your attention.

Sound of Hungry Shark World matches perfectly with the pictures. Besides, it makes the game even more realistic. If you get bored with the soundtrack on the background, you can simply turn it off for some time. You will be able to turn it on the back again any time you want it. Makes sure the music does not distract you from the game.

Hungry Shark World is fun, dynamic, and entertaining. Besides, it is an education in some way, especially when it comes to exploring new places, oceans, and seas. And don’t forget new species that you will find under the water. It is a solo game. You can explore open worlds as much as you want.