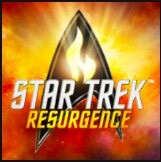 Star Trek: Resurgence is an interactive narrative video game that tells an original story set in the era shortly after the events of Star Trek: The Next Generation. Players will assume the role of two principal characters, first officer Jara Rydek and engineering ensign Carter Diaz, as they unravel a sinister mystery involving two civilizations on the brink of war. Players will immerse themselves in the Star Trek universe, interacting with new and returning characters through a variety of dialogue choices and action gameplay to determine the course of the story.