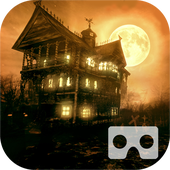 House of Terror is an innovative horror game that employs the possibilities of modern virtual reality systems and tries to use their potential to the fullest. Enter the strange house, solve puzzles, search for hints, and try to get out without being caught by monsters.

The gameplay is quite typical for a horror game. You find yourself locked in an abandoned house, and all you have to do is to solve its dark mystery. Of course, you have to solve all kinds of puzzles along the way, and a lot of them seem to be not that logical, but that is common for similar adventure games. You are free to move around the house, looking for anything that may help you progress.

However, you are not alone in this haunted house. There are all kinds of monsters and traps waiting for you, so you have to be extremely careful, especially when exploring the darkest corners of the house. The suspense this game offers relies heavily on virtual reality devices, and they allow you to reach high levels of immersion, indeed, making monsters much scarier.

This game is free to download, but the free version contains a lot of ads that can be quite annoying. The only way to get rid of them is to purchase premium options, so keep that in mind before downloading.

The VR-based controls are very intuitive – after all, you see what your character sees. You can play House of Terror with basically any VR glasses, but the developer recommends to use its own special VR system. Using this system is optimal, because the game is tailored to work on it perfectly, but it works well on other systems, too. However, some players report that the game just doesn’t start on certain systems.

House of Terror is an adventure game with horror elements, and such games tend to have low replay value. It is partly because there is only one linear story, so there’s nothing exciting about exploring the house again, if you know the whereabouts of every item or trap. And the monsters get less scary with each subsequent contact, so the horror element deteriorates rather quickly.

The graphics are probably the most prominent feature of this game. The visual style is not outstanding, but it definitely plays a leading role in creating the gloomy atmosphere. The house looks dark and realistic, and the monsters are simply terrifying, especially when you meet them for the first time. The light and shadows, which are crucial for every horror game, are simply great, too.

The sound effects match the game very well. The soundtrack is dark and mysterious, and the sounds of objects and monsters are great.

House of Terror is an interesting horror game that relies heavily on using VR systems, and that seems to make the game scarier and more engaging.