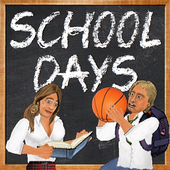 Become the most popular student of the school. Go to classes on a schedule, explore the city in search of secrets and tasks. Talk with other students, earn respect among your classmates, residents of the city. Prove to everyone that you are a cool child, not a nerd. Or vice versa become a whipping pear. Correctly answer the questions of the tests, with this you can earn the respect of teachers.

In the game, you have to choose a character for whom you will play. Go to the lessons on a schedule, answer the test questions correctly, select the books, look for answers to the tests in them. Also in the textbooks, you can find new techniques that will help you defeat opponents and increase credibility among students and teachers. At the top of the screen, there are two character indicators: a health indicator and a reputation indicator, the amount of money the character has saved. The game has a simple story that guides the player. Something like the game “Bully”, which was released on PS3.

Control of the character occurs with the help of virtual buttons on the touch screen. On the left side of the screen are buttons on the screen moving left/right, up/down, as well as interaction with objects. For example, sit on a chair and more. On the right side of the screen, there are 5 basic interaction buttons. The buttons are marked with different colors, and letters, where A-Attack, G-Grapple, R-Run, P-Pick Up/Throw, T-Taunt/interaction with the picked up thing. In my opinion, the management is not finalized as it should, because after pressing the button, time passes, which prevents a comfortable game. Character's movements are somewhat slow, the school map is well drawn, but movement around the school is not well implemented.

This game can be played until it gets bored. Or until you reach the maximum level of respect. But unfortunately the mission is monotonous, fights and test tasks are repeated.

The game is made in 2D graphics. The problem is that the characters are female and male were drawn too similar. At least the faces do not have much difference. Although the problem with the distinction of male characters from female decides customization of appearance. Developers with each update add new hairstyles and clothes to the game. Movement of characters drawn, but very bad. The arms and legs sometimes move uncontrollably.

Only the main menu plays music. There is no music inside the game, and unfortunately, it is not enough, but there are sounds of footsteps, movement of objects, and surroundings. Dialogues are not voiced.

I can advise this game to those who love school subjects, the game “Bullie”, as well as early games like GTA. A good timekiller, but this game needs more work. Clumsy graphics, awkward movements of characters, a simple plot, the need to carry out missions to achieve the desired reputation, all this has some sort of charm. The game attracts with its incredible external simplicity, but very interesting filling gameplay.