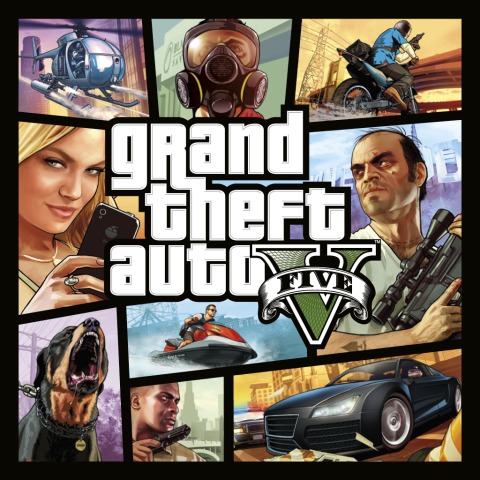 Grand Theft Auto V is one of the most popular action games in the world. Since its release in 2013, this game has managed to gain universal acclaim from critics and players alike.

Grand Theft Auto V follows the overall scheme of the previous games in the series. You get to play as a criminal trying to survive in a big city. However, now you have three different characters at once – and you can switch between them any time you want. Of course, each of them has his own background that makes the main story much more realistic and relatable.

The way this story is told is familiar – we drive around the city freely, looking for missions. Completing a mission grants you some money (sometimes a lot) and unlocks new missions around the map.

The overall gameplay has remained pretty much the same, too. You can steal cars, purchase weapons or clothes, shoot innocent bystanders or cops, and so on. While the world of GTA V is open and quite vast, it also feels a lot more alive than in the previous GTA games. The level of detail is simply amazing, and almost every city block hides some kind of random encounter or mini-mission for you to discover.

The controls are extremely intuitive. You move around with your keyboard using a mouse for aiming or just looking around. Characters are responsive, and you can customize the way they behave in the main options menu by changing the mouse sensitivity level and so on.

The game offers you an open world with hundreds of separate locations to visit, and there are also a lot of missions you can complete. That makes GTA V last for hundreds of hours – and even more if you’re not in a hurry and enjoy just driving around the city. And when you finally get tired of that, there is this GTA Online mode for you that can worth about a thousand hours more. All in all, the game has a replay value that can be matched by few other video games.

The entire Grand Theft Auto series has been pushing limits of visual design quality for decades – but it still amazes me how high is the bar GTA V has set. It’s been seven years since its original release, yet it looks as fresh and alive as ever. Cars and characters are extremely detailed, and the world itself feels so alive that you can actually walk around Los Santos for fun just gazing at the buildings around you.

Sound design has been one of the most iconic features of the GTA series for long, and GTA V continues that tradition. The ambient sounds like engines roaring are superb, the voice acting is great and realistic to the point where in-game cut-scenes start to look like movies, and the soundtrack is epic.

One of the greatest action games of our time, Grand Theft Auto V is a must-play for just about every gamer. Be sure not to miss it – and check out GTA Online, it’s definitely worth your time.